Its clean and tidy user interface provides exactly what you when dialing in your monitor sound on stage. 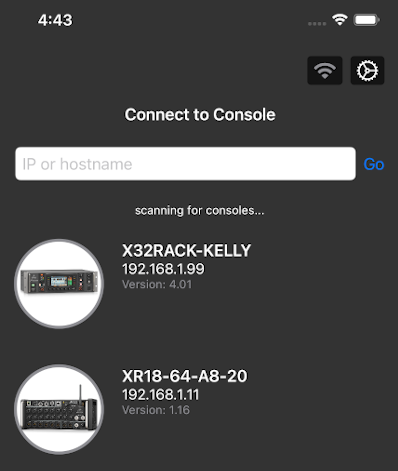 When MXBus starts it will scan the WiFi network for available consoles to connect to. Normally your console will show up in the list and you only have to tap it to connect.

If the console doesn't show up you can still enter the the IP address or hostname in the textbox and tap the Go-button. This may be the case if the mixer is in a different network segment than the WiFi access point.

If you have auto-connect option turned on it will skip that screen and automatically connect to console that were connected to before. This saves you one click — when you launch the app you want it operational as quickly as possible.

The mixer always shows the selected mix bus on the left which lets you control the master volume of bus at any time.

On the right you have the channels. Stereo linked channels show as one channel to save screen real-estate. You can page thru the channels by swiping to the left and right. At the bottom you see the page indicator.

On the top you can select and unselect the groups. If you hit the pencil you can edit the group assignment.

When a group is selected you will have volume buttons for the entire group on the far right. This can be turned off in the settings.

The colors and names of the channels are controlled on the console. There is a convention to name linked channels with a trailing L / R. MXBus will cut the off as it represents them as a single channel. This can be disabled in the settings.

To disconnect from the mixer tap the green WiFi symbol which will take you back to the connection view where you can select another console or reconnect. 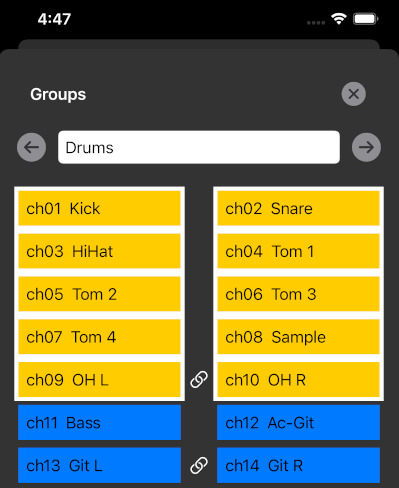 The group editor lets you assign names and channels to the four groups. Tap the channels to select or unselect a channel for the group. Linked channels can only be selected as a pair.

With the arrow buttons you can cycle thru the groups. 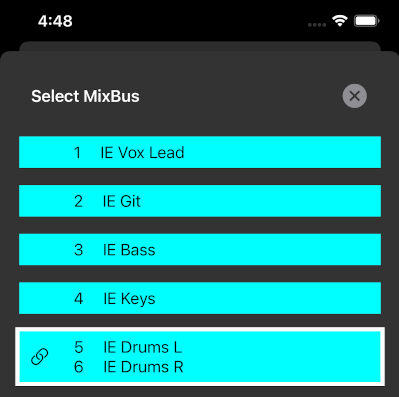 First time you connect to a mixer it pops up a view that lets you select the mix bus you want to control.

If you want to change the bus simply tap on the mix bus on left side in the mixer view.

How battery hungry is the app?

What consumes most of the CPU power is displaying the meters. When you have it running displaying the mixer view it will consume battery. If you are playing a 5 hour gig and want it running all the time you might want to conssider bringing a power bank or charger.

The console doesn't show up in the list — whats going on?

OK - so this really depends on the network setup you have. The console discovery feature uses a UDP broadcast to make the consoles on the network respond. If you aren't seeing the console it means that the packets didn't make it to the console or back to your device. This could have multiple reasons:

Why isn't there a light background?

You will be standing on a stage likely in a dark room or venue. Idelally there is a light show which we don't want to interfere with. Illuminting your face is someone else's job. :)

The app is built with privacy in mind. It doesn't access any of the data on your device. It stores the config and group settings in the user defaults store – no cloud access at all.

There are no ads and no user information is read at any stage.